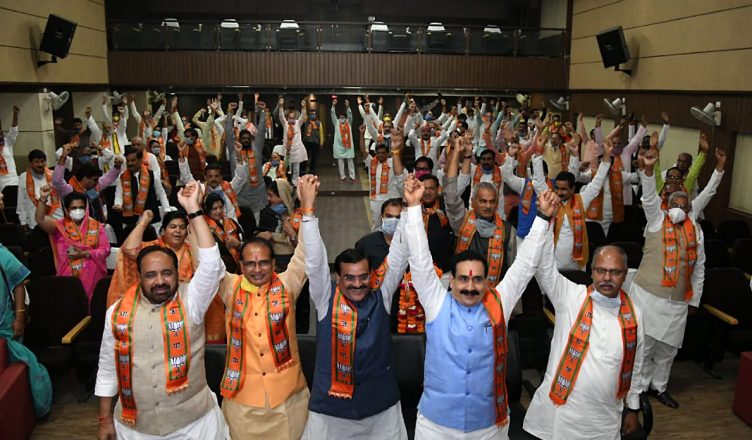 Madhya Pradesh, the state which was subjected to political turmoil when the Bharatiya Janata Party (BJP) decided to target and topple a democratically elected government, is quavering under the weight of Covid-19. While the BJP leaders were busy destabilizing the government, MP was slowly and steadily inching towards an increasingly high number of positive coronavirus cases. Now, it has emerged as one of the worst affected states in the country, with 3 hotspots and a higher death rate than the national average.

The BJP came to power on 23rd March with the swearing in of the now Chief Minister, Shivraj Singh Chouhan, two days before the lockdown was announced by PM Narendra Modi. Mr Chouhan is seen to have had very little time to choose his Cabinet, which is usually a long process in India which includes many negotiations to ensure representation of different communities keeping in mind other political considerations. This means no health cabinet! This is particularly alarming given the weak health infrastructure of the state.

Sachin Jain, a social and food rights activist said, “It’s a fact Madhya Pradesh has not handled it as it should have been. This is due to the battle for power when the problem was blowing up. Our political leaders were busy in political wrestling.” He further added, “They (government) haven’t involved civil society organisations. We are struggling to get passes for food distribution (for the poor). The police (instead of healthcare workers, in many instances) are going to pick up coronavirus cases. There is a total disconnect.” https://realreport.coronation.in/why-suspension-of-mplads-fund-is-a-bad-idea/

India’s response in the fight against coronavirus has been dependent on state leadership, as public health is a state issue in India’s federal system. Strategies to curb the infection are different from state to state and so, the impact of coronavirus in the state and the measures taken to control it is directly up to the chief minister, as long as it is in line with the PM’s directives. Unfortunately for Madhya Pradesh, that was the case in the state as well. Perhaps, the worst thing that could happen to the state before the pandemic enveloped India was BJP’s goal to overturn their government rather than focussing on saving human lives from the deadly virus.

A Covid-19 task force, involving political leaders but absolutely no health experts, was set up recently, as late as 13th April, to coordinate the response. The response of the state government has been so delayed that as many as 94 Health Department officials and personnel have been infected with coronavirus, including 20 members of the police department.

According to a political analyst in Bhopal, Rasheed Kidwai, “Madhya Pradesh is a backward state. State health services have been very bad. Successive governments have not been making any effort to put strategy in place to deal with health services…All those things need to be addressed. What is happening in the fight against the coronavirus is that they are enlisting other health services. They don’t have the capabilities.”

One piece of good news in all of this is that the opposition party, the Congress, are now seen to be striving for some political unity. “We have to be united in our fight against the coronavirus. Fighting together is going to take India forward. If we fight each other we will lose,” said Congress leader Rahul Gandhi. But will the BJP leave petty politics aside at the time of a pandemic? They didn’t seem to care in Madhya Pradesh.

One thought on “Madhya Pradesh Suffers under BJP Rule”