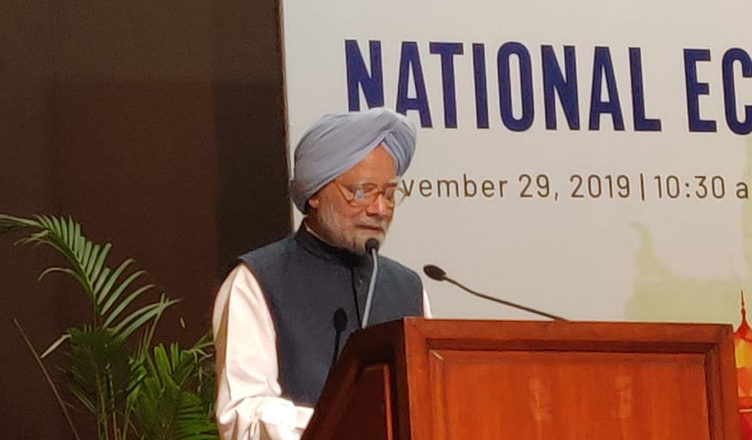 Criticising the Modi government over the latest GDP number which has come down to 4.5 per cent, lowest in 26 quarters, former Prime Minister Manmohan Singh called the situation “worrisome” and added that many industrialists have told him that they lived in fear of harassment by government authorities.

“There is no one today that can deny the sharp slowdown in India’s economy & its disastrous consequences particularly for our farmers, youth & poor. The GDP figures released today point that the growth rate of our economy in Q2FY20 is as at 4.5%. This is clearly unacceptable and the aspirations of our people want that this country should grow at 8-9% p.a. And therefore the sharp decline in growth rate from 5% in the first quarter to 4.5% in the second quarter is indeed worrisome,”  he added.

While stressing on the fact that an economy is a function of the numerous exchanges and social interactions among the people and various institutions, the former Prime Minister said there is a palpable climate of fear in our society today.

Also read: Lucknow: 64,000 trees to be cut down for Defence Expo

“Bankers are reluctant to make new loans for fear of retribution. Entrepreneurs are hesitant to put up fresh projects for fear of failure attributed to ulterior motives. Technology startups that are a new engine of economic growth and jobs seem to live under a shadow of constant surveillance and deep suspicion. Policy makers in government and other institutions are scared to speak the truth,” he added.

Singh said that it was the toxic combination of deep distrust, pervasive fear and a sense of hopelessness in the society that is stifling economic activity and hence economic growth.

“It is my belief that mere changes in economic policy will not help revive the economy. We need to change the current climate in our society from one of fear to one of confidence for our economy to start growing robustly again at 8% p.a.,” Singh maintained.