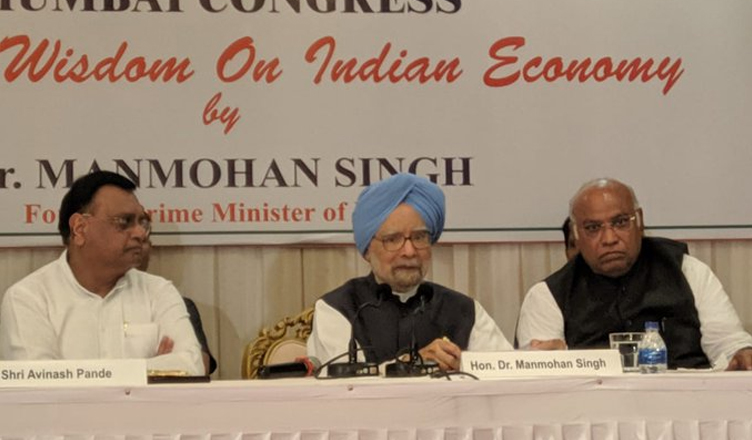 In an interaction with the business community and media in Mumbai, former Prime Minister Dr. Manmohan Singh on Thursday attacked the Maharashtra government over its various failures.

Commenting on the industrial slowdown, Singh said that Maharashtra has witnessed one of the highest factory shutdown in the past 5 years.

“Sadly, the present slowdown and the Govt’s apathy and incapability are affecting the future and aspirations of millions of our people. The much advertised, double engine model of governance on which the BJP seeks votes has utterly failed. Maharashtra has had to face some of the worst effects of the grave economic slowdown. The manufacturing growth rate of Maharashtra has been declining for 4 consecutive years. Maharashtra has witnessed one of the highest factory shut down in the past 5 years,” Singh said.

“The industrial slowdown has been met with rising imports from China. In the last 5 years, imports from China have risen by more than ₹ 1 lakh 22 thousand crores. Chemicals, fertilisers, electronic goods and automobiles, products manufactured in Maharashtra have seen rising import from our neighbouring countries. I was told of the gloom prevailing in the auto hub of Pune, India’s largest auto manufacturing centre. Similar problems are affecting Nasik, Aurangabad, Nagpur and Amravati which were once vibrant Industrial sectors,” he added.

The former Prime Minister further said that as demand and production have contracted due to economic mismanagement, business sentiments are down across the state and many firms face closure.

Targeting Chief Minister Devendra Fadnavis-led Maharashtra government, Singh said that in urban areas, every third young person is unemployed and that young people are taking up low paying jobs due to dearth of opportunities.

“Only in the recent past, Maharashtra used to attract talent from around the country. Today, there is a dearth of opportunities in this otherwise vibrant state. In urban areas, every third young person is jobless. Educated individuals are facing higher rate of unemployment. It is thus no surprise that many of our young men and women are taking up low paying jobs, investors are shifting to other states. The distress prevailing in our rural areas will only add to the unemployment problems as migration increases,” he said.

“Maharashtra used to be number one in attracting investments. Today, it is a leader in farmer suicides. Despite the promise of doubling farm income, the rural areas of Maharashtra are witnessing nothing short of a crisis. Caught between low income and high death traps, the suicide rate has doubled. The obsession with low inflation is inflicting misery on our farmers. The Central Government’s import-export policies are also hurting farmers,” he said.

Reminding people of Congress’ tenure, Singh said that the grand old party was committed towards addressing the issues the state was suffering from.

“During my tenure as PM, I had the privilege to work with many leaders from Maharashtra. I found that they were all committed to delivering good governance to the people of Maharashtra. The Bandra-Worli sea link is one example of the spectacular work that Congress could ensure. At the time of agrarian distress, we delivered an effective loan waiver and ensured rural growth,” he said.

“I can say without a doubt that the state will progress much better under the leadership of Congress-NCP,” he added.

Attacking the government, Singh said that the current government is obsessed with trying to somehow fix blame on its opponents.

“In the process, it is unable to find solutions that will ensure the revival of the economy particularly strengthening of our banking system. A lot of problems facing Maharashtra today are man-made and the solutions lie in policies which are inclusive and people welfare-oriented,” he said.

“It is my sincere belief that we need to go back to these time tested measures if we are to ensure gainful employment for our young people, men and women, farmer welfare and a better standard of living for all the people of Maharashtra,” he added.