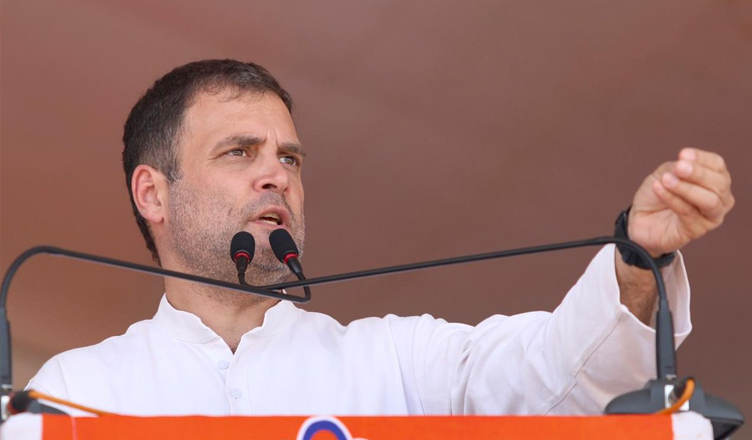 Launching an attack on him, Congress President Rahul Gandhi on Friday said that Prime Minister Narendra Modi’s philosophy is that of violence and not of Mahatma Gandhi’s values.

“Modi ji’s philosophy is that of violence and not of Mahatma Gandhi’s values,” Gandhi said while addressing a press conference in New Delhi.

Commenting on PM Modi accompanying Amit Shah in a press conference at the same time as his press conference, Gandhi questioned as to why did PM  Modi not accept his debate challenge on the Rafale deal.

“PM Modi is “accompanying” Amit Shah in a press conference, which is an unprecedented event for him. Let me ask him a question right now- Mr. PM, why did you not accept my challenge to debate on corruption in Rafale?” he said.

The Congress Chief further said that the Election Commission’s role in this elected has been biased.

“The Election Commission’s role in this election is biased. The entire election schedule is formed primarily to benefit Mr. Modi,” he said.

Condemning him for unable to deliver on his promises, the Gandhi scion said that PM Modi had a huge opportunity but he abused the vision which the people of the country gave him.

“Mr. Modi had a huge opportunity. I would have liked to see him moving the country forward. He lost sight of the real picture, people chose him to give the country a vision, but he chose to abuse our vision. There is no work that’s been done by Mr. Modi, so now he is distracting the nation,” he said.

Gandhi also applauded the Congress party for excelling in its role as the opposition party.

“Congress party has excelled in its role as the opposition party. We dismantled the idea of Mr. Narendra Modi being anti-corrupt. Today the entire country resonates with ‘Chowkidar Chor Hai.’ Our strategy for the last 2 years was to systematically close every door to stop Narendra Modi from escaping. We closed 90% of the doors, and he helped us close the remaining 10% by abusing people,” he said.