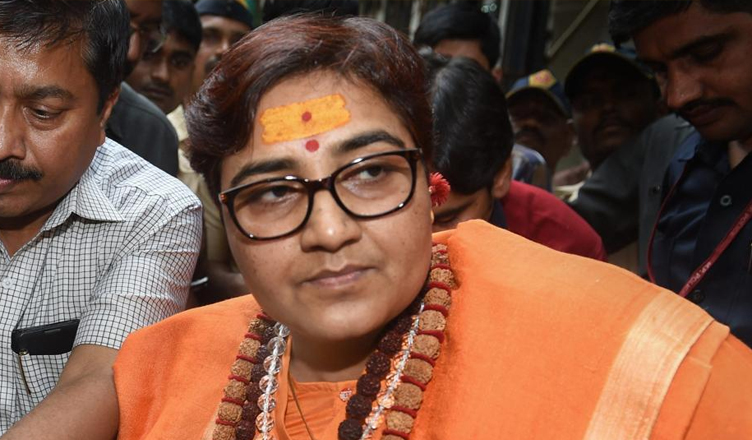 Condemning her for calling Nathuram Godse, the man who assassinated Mahatma Gandhi, a ‘true patriot,’ the Congress on Thursday said that BJP Bhopal Lok Sabha candidate Pragya Thakur has committed an unpardonable sin.

“The favourite of PM Modi-Amit Shah duo, Pragya Thakur crossed all limits today and committed the unpardonable sin of describing Nathuram Godse as a true nationalist. BJP and its leaders are deliberately and in a concerted conspiracy attacking the thought, the entire way of life as also the teachings of Mahatma Gandhi,” Congress spokesperson Randeep Surjewala said while addressing a press conference.

This is not the first time the Thakur has made a controversial statement.

Earlier in April, Thakur had said that martyred ATS chief Hemant Karkare died during the 26/11 Mumbai terror attacks as she had “cursed” him for “torturing” her.

“This is an unpardonable sin that cannot be pardoned. The truth is that insulting India’s martyrs and denigrating them has become the culture of the BJP. Modi-Shah duo’s favourite Pragya Thakur described the 26/11 Mumbai terror attack martyr Hemant Karkare as anti-national,” he said.

Surjewala further condemned PM Modi for not taking any action against her and in fact defending her.

“Yet, Modi ji did not punish her, did not withdraw her candidature but proceeded to defend her through television interviews,” he said.

The Congress spokesperson then called upon the PM to tender an unconditional apology to the nation.

“We call upon the PM to tender an unconditional apology to the nation and take punitive action against Pragya Thakur otherwise it will be more than proved that such acts of denigrating the Father of the Nation Mahatma Gandhi by the ilk of Pragya Thakur has the active concurrence of PM Modi and the BJP leadership,” he said.