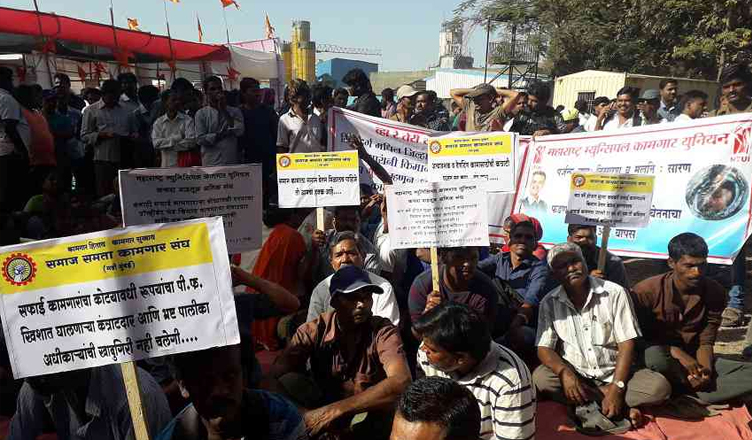 Hundreds of sanitation workers on Monday held rallies in Delhi and Mumbai to criticise the Prime Minister Narendra Modi-led NDA government and its failure to take steps towards ending manual scavenging and ensuring better lives for sanitation workers.

The protest comes a day after PM Modi washed the feet of five sanitation workers at Prayagraj.

“What is the point of washing feet when his government has failed to stop those feet from entering sewers? When it has failed to give even one paisa in compensation to those who have died in the sewers?” The Hindu quoted Darshan Rattan Ravan, the leader of the group Aadi Dharm Samaaj (protesting in Delhi), as saying.

Ravan also lambasted at PM Modi for talking of manual scavenging as a “spiritual experience” in his book, Karmayogi.

“If people can attain moksha for entering the sewers, why go on a pilgrimage? This is the way to misguide illiterate people,” The Hindu quoted Ravan as saying.

While addressing the protesters, Swaraj India president Yogendra Yadav listed out demands that should be included by political parties in their 2019 election manifestos.

Also read: We will restore Special Status to Assam which BJP took away: Rahul Gandhi

“All manifestos for the 2019 Lok Sabha polls must include the promise to implement the Supreme Court’s orders and the anti-manual scavenging laws, to end all human entry into sewers within one year, to regularise all sanitation jobs by ending contract work in the sector within five years and to develop a national consensus on sub quotas for the castes engaged in such work,” The Hindu quoted Yadav as saying.

In Mumbai, workers had assembled at Azad Maidan and protested against the government’s failure to implement government resolution (GR) which was passed in February 2015 and that granted minimum wages to all municipal contract workers.

As a mark of their protest, the workers organised a ‘GR wapsi” and dumped copies of the GR into a trash bag.

The workers all over have been demanding for better working conditions, implementation of reservations and separate education and job quotas for sanitation worker communities.

“Clean your mind not our feet, Mr. PM! Highest form of humiliation. 1.6 lac women still forced to clean shit, not a single word in five years. What a shame! #StopKillingUs,” Wilson tweeted.