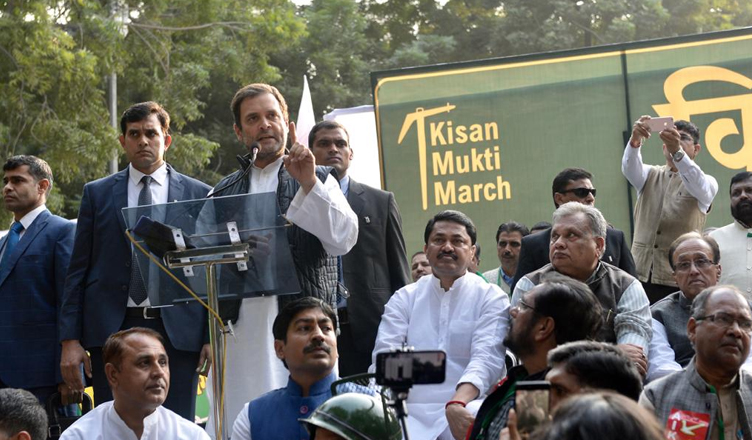 Extending support to the Kisan Mukti March, organised under the banner of the All India Kisan Sangharsh Coordination Committee (AIKSCC), a platform of 200 farmers’ groups, Congress President Rahul Gandhi on Friday said that farmers are not seeking any favours but only demanding their rights.

“The country is facing two issues today -unemployment and the farm crisis. In the last four years, the Modi government has waived debt with Rs 3.5 lakh crore of 15 businessmen. If that can be done, it is also possible to waive the loan of our farmers. The farmers are demanding their rights, they aren’t seeking any favours,” Gandhi, who reached Parliament Street, said while addressing the farmers in the March.

Farmers, today, marched to the Parliament Street from Ramlila Maidan, to raise their demands including implementation of the MS Swaminathan Committee, better Minimum Support Price (MSP) for their crops and loan waiver.

Gandhi further said that any government that insults the youth and farmer of this country will be thrown out.

“Leaders of all parties are sitting here. We have different ideologies, but we are united for the future of this country, its youth and its farmers. Modiji speaks on behalf of industrialists like Anil Ambani. Any government that insults the youth and farmer of this country will be thrown out. We stand with you. We are ready to do whatever you want, even if that involves changing law. This country is not run by an individual, it’s run by you, its countless farmers who work hard day and night,” he said.