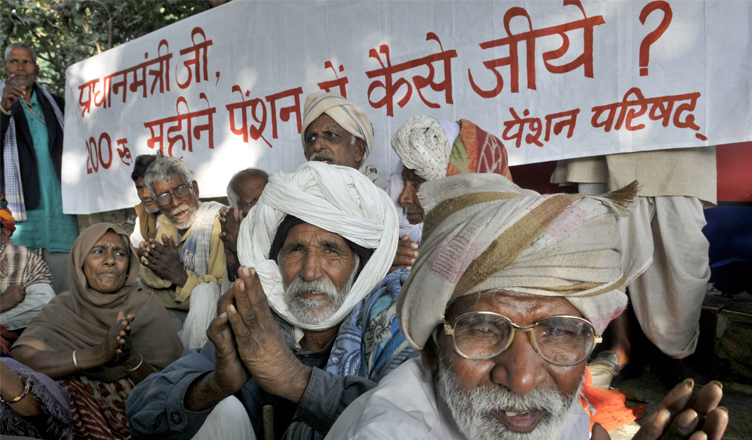 As many as 63 lakh pensioners have threatened to stage self-immolation and mass suicides on December 4 if the government fails to address their pension-related demands.

The pensioners will be protesting against low payouts from the Employers Provident Fund Organisation (EPFO)-95 scheme. More than 12 lakh letters have been written by them to the Prime Minister’s Office (PMO) but none of them has been addressed. As a result, the pensioners have now decided to take this extreme step if their demand remains unaddressed.

“Nearly 63 lakh pensioners who are receiving pensions in the range of ₹200 to ₹2500 post-retirement have threatened of a mass suicide to make their voices heard. On December 4, 2018, the EPS-95 pensioners will stage a protest outside EFP office outside Bhikaji Kama Place and sit on an indefinite strike,” Commander Ashok Raut, the president of the Rashtriya Sangharsh Samiti, the organisation representing the interests of old pensioners, told National Herald.

“Nearly 63 lakh pensioners are getting pensions less than ₹1500 per month and the EPFO is misleading them,” Raut added.

He further said that despite Prime Minister Narendra Modi having promised to increase the pension’s amount to ₹1000 in 2014, 17 lakh pensioners are still receiving less than ₹1000 a month.

“The EPS-95 pensioners are being given in between ₹200 and ₹2500, despite a high rate of inflation. The representatives of the pensioners have even staged a protest in front of 10 selected CBT members in New Delhi, Visakhapatnam, Jalgaon (Maharashtra), Lucknow, Chandigarh, and Kolkata to mark their protests,” Raut told National Herald.

“Ironically, the government employees are being paid in between ₹1 lakh to 1.5 lakh per month and here pensioners are not even getting proper amount to fend their family,” he added.

An EPS-95 pensioners’ delegation had met Union Road and Transport Minister Nitin Gadkari, Finance Minister Arun Jaitley, Labour and Employment Minister (MoS) Santosh Gangwar, numerous Members of Parliament, CBT and the Delhi Police Commissioner on November 12 and had raised the issue of death of more than 12 lakh pensioners within a year.

Gangwar had then demanded a month extension till December 12 for the government to address their demands but “we told them that we have already been protesting for four years and we couldn’t afford them anymore time,” Raut said.