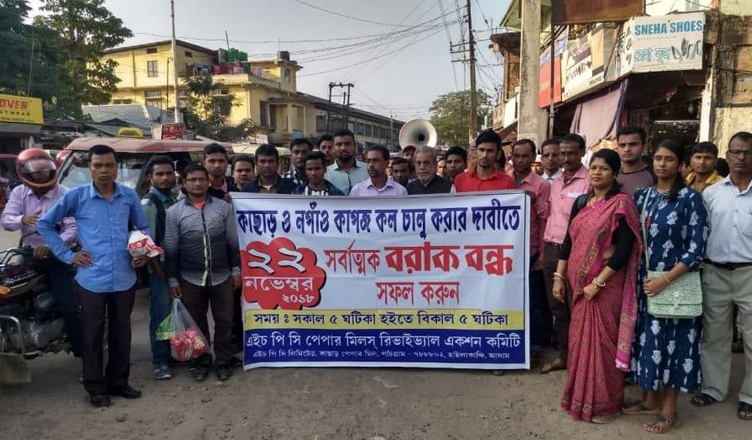 The Hindustan Paper Corporation (HPC) Paper Mills Revival Action Committee (HPCPMRAC) called for a bandh on November 22 demanding revival of the Nagaon and Cachar paper mills of the HPC and pay the pending salaries of employees.

The bandh was supported by the Congress and Socialist Unity Centre of India (Communist) and it turned out to be successful as schools, colleges and offices remained shut across Barak Valley for around 12 hours.

“During Assam assembly elections in 2016, the prime minister promised that the paper mills will re-open, he made the statements while campaigning in Barak Valley and near Nagaon as well. But, nothing happened. The Cachar and Jagiroad Paper Mills Revival Plan is in PMO (Prime Minister’s Office) awaiting approval. The salaries of the employees are pending since the past 24 months,” Cachar Paper Mill Officers and Supervisors Association General Secretary Mr Dipak Chandra Nath told NewsCentral24x7.

“Due to the gregarious flowering of bamboo, we had to import pulp from Indonesia, Malaysia, and other countries. Later, due to an NGT order, coal production was banned in Meghalaya. We imported coal from Australia, but that was not suitable to the weather condition here, with rain, the coal used to turn muddy. Moreover, transporting materials to Panchgram was a problem,” Nath told NewsCentral24x7.

Nath further told that promises were made to revive the mills and pay salaries to its employees but nothing has materialised so far.

“Every time, we get to hear the same assurances. Last November, during Namami Barak event in Silchar, Union Minister Babul Supriyo said in the presence of Sonowal and President Ram Nath Kovind that the mills will re-open within six months. It’s been a year now, forget about re-opening, we have not even received our salaries yet,” he said.

The HPC Mill workers have given an ultimatum now. They have announced that they will boycott the local body elections, scheduled for December 5 and 9, if the government does not pay their salaries by that time. They slogan is ‘No salary, no vote.’