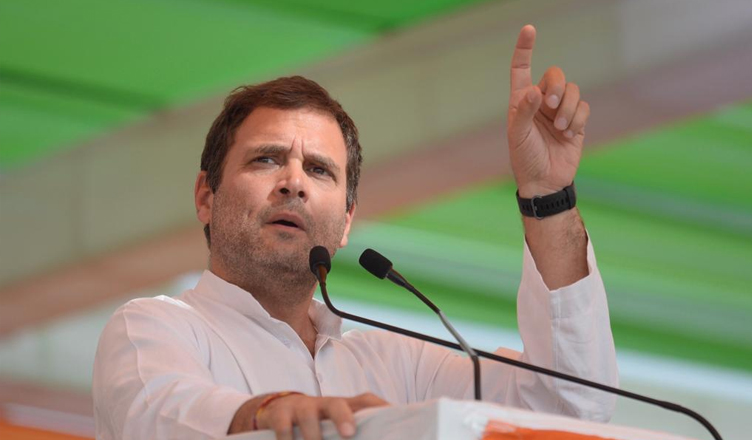 While appealing Congress workers to fight the upcoming Rajasthan Assembly elections with love and compassion, Congress President Rahul Gandhi on Monday said that Congress government will ensure that the benefit of public money reaches all sections of society.

“Congress government will ensure that the benefit of public money reaches all sections of society, unlike BJP governments, where only a handful of industrialists benefit,” Gandhi said while addressing a rally at Pokhran.

The Congress Chief hit out at Prime Minister Narendra Modi and said earlier the latter used to talk about 2 crore jobs, Minimum Support Price (MSP) to farmers and corruption but nowadays, he does not mention about any of these promises as he failed to fulfil all of them.

“Demonetisation was imposed upon people of India claiming to fight against black money. But all we witnessed was farmers, women, labourers in queues while the black money hoarders converted their money to white,” he said.

He further attacked the government over the PNB scam. He said, “Nirav Modi eloped with ₹35,000 crore of public money. How many jobs did he create? If a fraction of this was given to young entrepreneurs, they would’ve created thousands of jobs.”

“Lalit Modi gave ₹10 crore to the son of the Rajasthan Chief Minister. The entire India knows,” he added.

Talking about his own party, the Gandhi scion said that the Congress government will waive off farmers’ loans within 10 days of coming to power.

“We will ensure that the youth of Rajasthan get loans for opening their businesses and factories,” he said.

“Previous Congress government’s policies enabled free medicine to the people. We will bring those policies back,” he added.

He concluded by saying, ” I will not lie to you I nor do I wish to make hollow promises to you, because I respect you. A lot of work can be done with honest.”

He will address two more public gatherings at Jalore and Jodhpur later in the day.

Earlier in the day, Gandhi paid his respects at the Brahma temple in Pushkar and offered prayers at the 13th century dargah of Sufi saint Khwaja Moinuddin Chisti in Ajmer.