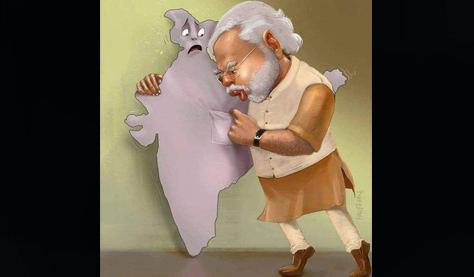 The Centre’s Narendra Modi government is celebrating the “successful failure” of the biggest and cruelest joke any democratically elected government ever played on its electorate. At 8 PM on November 8 last year, the Indian Prime Minister had appeared on national television to announce he, with his most amazing economic wisdom, and decided to rob people of his country with their hard earned money and livelihood to eradicate “black money, terrorism and counterfeit currency” from the country. He was sounding jubilant and was beaming with pride.

The narrative of the government though kept changing every time people pointed out the glaring failures of the objectives the PM had stated. The credibility of an autonomous institution was irreparably damaged when RBI joined the government to issue new circulars every other day on government orders, changing its own stand to hide the failure of the government decision which was taken to project the PM as a strong man without any basic economic considerations.

On the first anniversary of that economic blunder, the government and Right-Wing economists are left with nothing to highlight as success, but the government’s claim of identifying 200,000 shell companies. Though there is no new data released to support this claim by either Ministry of Corporate Affairs or Ministry of Finance, the available government data in public domain suggests, this claim is also without any actual base (at least the number of shell companies repeatedly raised and identified by PM, various Union Ministers and ruling party members).

What is a ‘Shell Company”?

This question was raised in Lok Sabha On 21 July 2017. MoS for Corporate Affairs gave the answer which states, “The term Shell Company is not defined under the Companies Act. However, the Registrars of Companies have removed 1,62,618 companies from the register of companies as of 12.07.2017 after following the due process under section 248 of the Companies Act, 2013 as detailed in Annexure-1 maintained by the Ministry as per the respective ROCs.”

It’s worth mentioning here that the term shell company is not mentioned under the companies act or any other Indian act.

So what do they mean when PM and other ministers keep using the term “Shell Companies”? Though there is no clear definition, we have to believe, a company which is formed to do dubious transactions to avoid paying the relevant and applicable taxes are called shell companies.

The reason we should believe such a definition is the frequent use of the term connected with Black Money. The government says they’ve struck off more than two lakh companies and many of them might be shell companies. And they have barred few lakh directors from many companies. There is something which has to be checked in these claims.

These numbers were 1,394,819 registered companies, 952,433 active companies and 442,386 inactive companies as on 31 March 2014. But, Union Revenue Secretary, in February this year said that 8-9 lakh companies are not filing their annual returns with MCA. The numbers are conflicting here and we don’t who to take seriously.

Section 455 of the Companies act explains: “ “Inactive Company” means a company which has not been carrying on any business or operation, or has not made any significant accounting transaction during the last two financial years, or has not filed financial statements and annual returns during the last two financial years.” It further explains “Significant accounting transaction” means any transaction other than (a) payment of fees by company to registrar (b) payments made by it to fulfill the requirements of this Act or any other law (c) allotment of share to fulfill the requirement of this Act and (d) payments for maintenance of its office and records.

Website of Ministry of Corporate Affairs list the name of the companies to whom they have issued notices. And RoC wise check of notices clearly states that all these were issued notices under Section 248 of companies act 2013.

Section 248 is an act which came into effect in 2013 to give the power to RoC to strike off the companies which did not commence business after two years of incorporation. The Government feels that such companies are a potential threat to the economy because it can be used as a medium for money laundering.

Interestingly, section 248(1) which the government is using to strike off / close down the companies came into effect through a notification on 12 December 2016 once the government started to realise the futility of the exercise called demonetisation which they have thrust upon the people. No clear numbers are ever published on how many of these 470,240 companies are served with notices? If 470,240 companies were inactive on 31 December, 2016 as per the definition mentioned in the Companies Act, how did the Union Revenue Secretary get the number of 8-9 lakh companies in February 2017?

There is another point in to it. On his Independence Day speech, Modi announced that his government had identified three lakh shell companies. He repeated the same line during his recent election rally in Himachal Pradesh. But, on 17 September 2017, LiveMint reported that as per the data provided by the Ministry of Finance, out of the total number of registered companies, nearly 600,000 companies pay their annual returns. If that claim is to be believed, India has, as mentioned by the MCA Annual report, beside 470,240 inactive companies, another six lakh companies which also might come under government’s shell company definition. This explains the “8-9 lakh shell companies” narrative of then revenue secretary. That means, the government says, any company which did not file regular returns is a shell company.

This is a dangerous narrative. There might be tens of thousands of companies which couldn’t arrange the capital as expected to start the business. Nobody knows how many of them hold properties in companies name, but not filing returns because there are no businesses transactions happening. Most of them might have operated well within the legal frame work, but might have ended up in disputes, litigation or any other such issue which forced them to suspend the operation till the things are cleared.. One can cite many examples here. Calling all such companies shell companies just to show government’s willingness to act tough against law breakers are sending wrong messages and painting the entire company directors in poor light.

Along with striking off the Companies, the government is disqualifying directors of those companies which did not file annual returns for three consecutive years under section 164(2)(a) for a period of five years and most of these companies are shown as active on MCA website.

Politics of retrospective application of law

Data on the MCA website shows some interesting pattern in this disqualification drive. 24 RoCs across the country disqualified 460,484 directors of different companies. This list might include the same name repeatedly because a person can be a director in different companies. Number of companies certainly will be less because one company will have many directors. The website is yet to publish the data of Cuttack, J&K and Jharkhand and for Hyderabad, latest data is not available.

RoC Coimbatore and Hyderabad are yet to upload the data for 2015 and 2016 respectively. The website shows it was last updated on 4 November 2017.

Section 164(2) of Companies Act 2013 correspond to Section 274(1)(g) of Companies Act 1956. But, there is a difference. Section 274(1)(g) was not applicable to private companies unlike section 164(2). In such a scenario, government’s intention to impose the section to disqualify the directors of the companies retrospectively with effect from 1 November 2014 is really questionable.

Senior partners of couple of law firms in Delhi, on condition of anonymity, voice concern about the move. A leading lawyer from Bangalore who specialises in Corporate Law says “This seem to be move to justify government’s fight against corruption is serious. But it (this move to disqualify Directors of Companies with retrospective effect) will not go unchallenged”.

Is the government, as the last effort to save face from the humiliation it is facing from world over for taking a reckless decision which spoiled an already slowing down economy, using its powers arbitrarily to showcase that the opposition ruled states are more corrupt? In the run up to Gujarat election, Modi government also need something to project as their achievement!