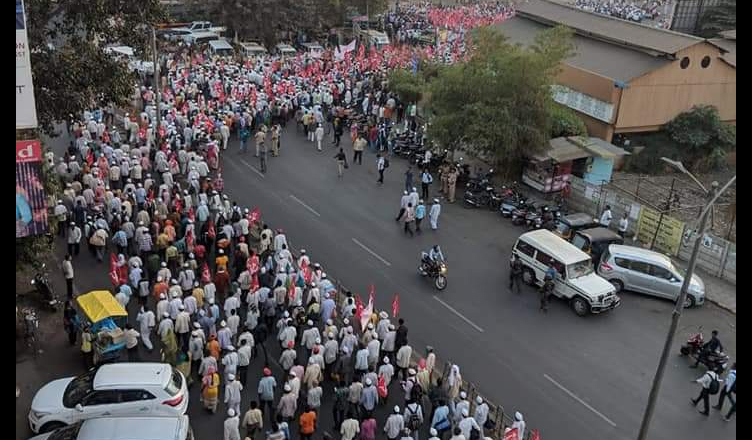 As many as 50,000 farmers on Wednesday assembled to begin their 180-km march from Nashik to Mumbai to protest against the “betrayal” done to them by the BJP government at the Centre and Devendra Fadnavis-led BJP government in Maharashtra.

The march, organised by the Communist Party of India (Marxist) (CPI(M))’s All India Kisan Sabha (AIKS), is the second such protest in the last 12 months.

AIKS has accused the Maharashtra government of neglecting them and not paying any heed to demands including, a complete loan waiver for farmers, implementation of Swaminathan Commission recommendations and Rs 40,000 per acre relief for all drought-affected farmers.

The march has been joined by farmers from 23 districts across Maharashtra, including peasants from Peint, Trimbakeshwar, Kalwan, Palghar and adjoining areas.

“A year has passed, but the state government is yet to fulfil its promises. Hence, the long march is being taken out to protest the betrayal of farmers by the BJP-led state and central governments,” NDTV quoted AIKS member Ajit Navale as saying.

Meanwhile, the members of the organisation have accused the government of trying to obstruct their peaceful march, but also asserted at the same time that they will go ahead with it anyway. “For several hours, police kept detaining groups of farmers coming to join the procession without assigning any reason. Cases are being lodged against our office-bearers,” AIKS spokesperson PS Prasad told IANS.

It was also reported that over 200 farmers who were travelling from Dhule to join in the protest in Nashik were taken into custody by the Dhule district police on February 19.

Last year on March 6, nearly 40,000 farmers began their protest from CBS chowk in Nashik to Mumbai after covering a distance of over 160 kilometers in the last six days.

The farmers had a number of demands including complete loan waiver, an overhaul of the river linking scheme keeping in mind the tribal villages and implementation of recommendations made by the Swaminathan Committee report from the BJP government in Maharashtra.

These are the same demands which have been raised by the farmers yet again simply because they have not been addressed by the state government and Centre yet.

One thought on “50,000 Maharashtra farmers march to Mumbai to protest against “betrayal””