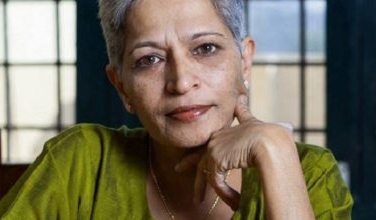 In what can be termed as a big breakthrough in Journalist-activist Gauri Lakesh Murder case, a 37-year-old man has been taken into custody by a Special Investigation Team (SIT) in connection with the same.

KT Naveen Kumar alias “Hotte” Manja was arrested by the Bengaluru Police on February 18 for possessing 15 rounds of .32 calibre cartridges.

Gauri was also shot dead with a 7.65 mm country-made pistol.

According to police sources, Kumar has close links to several radical Hindu outfits and was reportedly angry with Gauri for “insulting” Hindu gods and goddesses.

He is also the founder of a radical right-wing group called the Hindu Yuva Sene.

Editor of “Lankesh Patrike”, Lankesh, 55, was shot dead outside her house in Bengaluru by unidentified assailants on September 5 last year.

The incident was captured on a CCTV installed in the area, but the suspect was wearing a helmet.

The CCTV footage also showed the suspect conducting a recce of Lankesh’s house hours before the crime.

The state government had set up the SIT to probe the Lankesh’s murder.

“We had received a tip-off about Kumar, and we shared the information with the city police, which arrested him. Upon interrogation, it was found that he was an accomplice in the crime and hence we sought custody,” a senior officer said.

The police suspect that wither he was directly involved in Lankesh’s murder or he supplied weapons to the killers.

However, the police also claim that the killers caught by CCTV at Gauri’s house have some resemblance to him.

The police have taken Kumar to an undisclosed location for further interrogation.